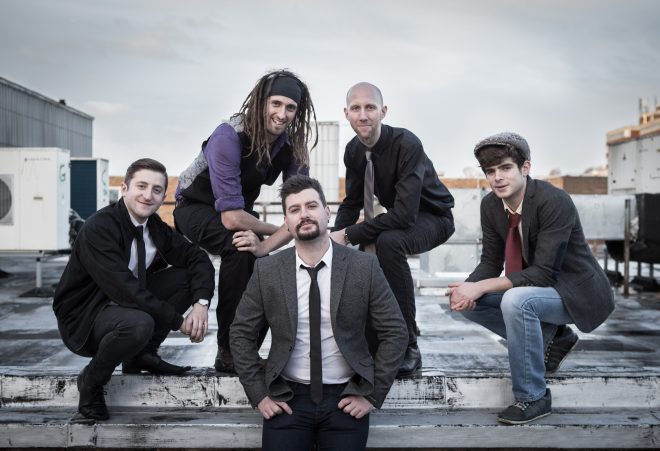 Two weeks ago I wrote about the beginnings of Codename Colin. It had been pointed out to me that I glossed over the true beginnings of the band a little so before I get into chapter Two, I think i’ll go back first.

The year was 2011. It was around November time as I’ve had a Facebook memory pop up of the initial “first contact” post of Adam asking if I was still in a band and if I’d be up for doing something. We were in The Flag in Watford, back when I’d still be happy to go in there. The band began with a few games of pool and a fair amount of beer. Like most bands I imagine. By January of 2012 we had recruited local Watford band whore, Alex Mead, on Bass, my life long mate Jay Aldridge on drums (who I also played with in Silo 18) the only trumpet player we knew, Graham Howes of ska pop punks Dr 8 Ball/Too Late Lucy and Alex’s bandmate from one of his other bands, Harriet Riley on Sax.

We wrote some songs, with the plan being that Adam would front the band and I would just mess about at the back somewhere. We wrote some songs, and worked on some covers, including the Keep on moving cover you all know, Livin la Vida Loca, and a Vengaboys special of Boom Boom Boom Boom merged with Going to Ibiza. As you can tell, we didn’t take much seriously. Adam had to leave before our first gig as his workload was ridiculous so I was pushed in to front it, despite not writing any of the songs. For a few months we practiced, recorded some songs, drank a lot, there was a lot of nudity for some reason and we drank more. We played a gig where every band on that night, covered Livin la Vida Loca, drank a lot of Corona beer and then I kind of lost interest as I couldn’t write anything very good and I was a bit of a stroppy bastard (still can be). So it ended kind of abruptly without many people ever really knowing about us.

So Chapter Two then!

We kicked off 2017 by releasing our first original song, New Years Resolution, along with a lyric video produced by Matt Attard of the band Junior. Matt has since done almost every piece of artwork for us as we love his style. Mew headed off to South America and Jamie came back in for a gig at New Cross Inn opening for Popes of Chillitown and Call Me Malcolm. Jamie and I stood at the back watching Malcolm smash it and said that day they will go far. We headed home with more determination to make our band the best it could be.

March rolled around and we had booked in with George Donoghue again to record four more songs over two weekends. Kieran smashed out the drums in no time and we put most of the guitar and some of the sax parts down the first weekend. Mew had only just arrived back in the country for the second weekend and jumped straight in. We decided throwing him back in at the deep end again was best, as we were recording the song Pulling Teeth, which was written while he was away so he had never heard it until he arrived. I’m pretty sure he wrote and recorded all the bass for that song in about twenty minutes. Genius. And that song is still my favourite Codename Colin song.

So the recording sessions had gone well and we had our Seven track EP, including the songs that had been previously recorded. It was then that we first heard from Andy Baker of Fandangle as I had been recommended him on a Facebook group for mastering. Being a fan of Fandangle growing up I didn’t hesitate to get him involved. We got the masters and then chose the single, Losing Touch. Time for a video! We recruited Adam Fitch who had previously done work with my friends Thrones and hired out the backroom of our local the Rose & Crown in Hemel old town. At the beginning of the year Mew had convinced us to go for the smart look on stage but we wanted to step it up for the video. So Iain got us all matching suits from Matalan and we thought we looked cool. Turns out we looked a bit too much like a wedding band but hey ho. We still think it helped set our band apart from other bands we were doing shows with.

We released the video and it was a huge success. We couldn’t believe how much people liked it. I spammed online facebook groups and paid for a few ads and it just flew. We had gained a really nice online following in the UK but this got more attention over in the US. Surprisingly it also got a lot of hate  over there online. FYI the Defend Ska Punk Group on Facebook was a great place for curing boredom for a while. It certainly kept us entertained. Some people obsess over ska just a little too much on there. So off the back of that video we had alot of gig offers fly in which included, the worst gig of our lives, in any band we have been in. I won’t go into too much detail but it ended up with Kieran playing a kit with no cymbals, us managing about twenty minutes before giving up, and Iain’s car dying, not breaking down, it died, on the way home. It was a shambles. But the other awesome gigs made up for it and we were gaining traction online and in London’s Ska scene.

For most of the year, i’d had an advert running on various websites about wanting a Trumpet player to fill out our sound. By this point in the year it had been completely forgotten about. And then I received an email from a man about joining the band. We got him in to rehearse and he introduced himself as Snowy. He fit right in and was gig ready by Autumn. Now as stupid as this is, it is 100% true. As I was the only one to read the email, I was the only one to see Snowy’s actual name. No one else in the band even thought to ask, and it was 2019 before everyone knew.

Then came the release of Outgunned in September 2017. It was well received and gained alot of love from online bloggers and reviewers. As our first DIY release we finished up very happy with it ourselves, not really knowing how to release a record we thought we had done very well with it. People actually bought it.

So we prepared ourselves for our last two shows of the year, The Cambridge Junction, and The Rose & Crown in Hemel. Both shows were incredibly good fun with awesome crowds, a great way to finish our gigging year. This was also the beginning of our friendship with Leicester Ska punks Last Edition, who as you may have seen, we now play out together as much as we can. Check out the live video of Cambridge!
https://www.youtube.com/watch?v=YX4lfXDwqfg

That was also to be the last shows with Kieran on drums. Kieran remains one of my best friends and after Covid 19 is dealt with we will be having a long over due beer! So we ended the year the same way as we had the last. By searching for and training up a new member. Luke Scarman. It was also around this time I started work on something with George that the rest of the lads were unaware of which ended up as our first release of 2018.