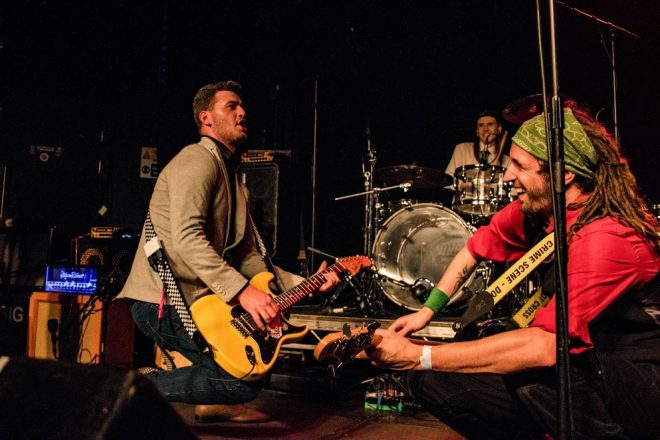 Ok so let’s not have this as one of those vague posts about things we can’t tell you yet, and fill you in on some other details while we are here.

Our album is written! We’ve named it too. It’s called Escape From Everything. For us, this band is a way to escape from the daily grind, the news of the world’s impending doom, or from those horrible little thoughts that come from nowhere to destroy us from the inside out.

I’ve definitely grown as a songwriter over the last couple of years with the help of the other dudes and we’ve tackled a few topics on this album. A few of the songs on this album are about the ups and downs of my mental state. The feeling of hopelessness or confusion with feeling low when you know there is no real reason for it at that point or about coming out of a particularly rough patch and realizing it’s OK. Other songs are a bit more topical.  Songs about dodgy pay to play promoters or the destruction of the planet. There’s a bit of everything and hopefully you’ll love it.

We have also decided too work with Andy Baker (Fandangle) for this album and have booked in for next month! We worked with Andy on the 1985 single last year, with him mixing and mastering for us and have been chatting ever since about doing more so it all just made sense.

For the artwork, we’ve got Matt Attard (Junior) in to design it. Matt has done the cover for Outgunned and the New Years Resolution single and lyric video and has always done a great job. We love his style so it made sense to keep working together.

So yeah it’s all coming along nicely. We haven’t got an official release date yet, but there will be something soon!

Oh yeah, those big announcements. you’ll want to keep an eye out over the next couple of days.